This is an optional tagline field 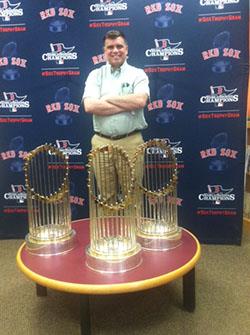 My name is Paul Mara and I have worked for the Berlin-Boylston Public Schools for the past 27 years, first as a computer/technology teacher and for the past 19 years as the District's Technology Coordinator.  Along the way I was also a soccer coach at Tahanto, the boys and girls cross country coach, and also the first track coach for boys and girls when track was re-instituted in 2008.  I also worked one year as the Dean of Students at Tahanto, the year before moving into our new facility.  Since taking over as Technology Coordinator I have seen our schools go from dial-up 56K modems and about a dozen desktop computers in each elementary school through this year where we now have over 2000 pieces of technology equipment and 100% wireless coverage.  It has been exciting along the way and I look forward to leading the Berlin-Boylston Schools as we thrive in a 21st Century learning environment.  Hopefully, the Red Sox will add one more trophy and I'll have to get another picture!